The Cobra Museum of Modern Art is exhibiting a special private collection of top art from Mexico, which has never been shown in the Netherlands before. In addition to paintings by Frida Kahlo (Mexico, 1907-1954), a selection of drawings and photographs will also be on display. The exhibition Frida Kahlo & Diego Rivera: A Love Revolution offers the opportunity to discover the world of the world-famous Mexican modernists.

Kahlo after work: visit us in the evening! The museum is open daily until 10pm.

Mexican Modernists
Through a number of themes, visitors will be immersed in Mexican ambiences to get to know Frida Kahlo, Diego Rivera and their contemporaries. The core of the exhibition at the Cobra Museum of Modern Art consists of twenty-three iconic works by Kahlo, including some of her most famous self-portraits. About thirty key works by her husband Diego Rivera and Mexican contemporaries such as Lola Álvarez Bravo, María Izquierdo, David Alfaro Siqueiros and Rufino Tamayo illustrate the period of artistic ingenuity in Mexico. These artists were convinced of their revolutionary influence on society. Historical photographs provide a glimpse of important Mexican cultural figures, especially Kahlo and Rivera, and show their unique personalities.

“With this exhibition, the Cobra Museum addresses pressing themes such as political and social engagement, free expression, emancipation and gender. Themes that are all the more important in our society in these turbulent times. We hope to inspire the public in our museum with the fascinating work of Kahlo and her contemporaries.” Guest curator Stefan van Raay

Jacques and Natasha Gelman
The Gelmans formed close friendships with many of the artists included in this exhibition, often as patrons and promoters of their careers. The works they collected offer an unparalleled opportunity to discover the chaotic and creative Mexican art world of the first half of the twentieth century in all its complexity. Modern Mexican art was to have an important influence on modern art and its impact can still be felt all over the world today.

“We are enormously proud to have brought this international top collection to Amstelveen. This would not have been possible without the support of our partners, the funds involved and private donors. I hope that the beautiful works of art can give the public hope, inspiration and strength in these difficult times.” Lillian Bóza, director Cobra Museum of Modern Art

Frida Kahlo: the pioneer
Frida Kahlo (Mexico, 1907-1954) is currently the most famous woman artist in the world. Kahlo was one of the daughters of a Mexican mother and a German photographer who had emigrated to Mexico. She studied art as a young woman, but was seriously injured in a tram accident in 1925 at the age of eighteen. She would be suffering from the physical damage caused by this accident for the rest of her life. Sometimes she is called the selfie-queen of the twentieth century, because she is best known for her self-portraits. Kahlo was a radical, talented, disabled, bi-cultural and bisexual woman whose legacy continues to inspire many worldwide.

As a student, Frida Kahlo became involved in the communist party, and spoke out against religion, fascism and class society. She maintained (extramarital) relationships with women and men in Catholic Mexico. She couldn’t care less about prevailing beauty ideals, and emphasised her eyebrows and facial hair. Her colourful dresses were inspired by the traditional dresses from the isthmus of Tehuantepec in the state of Oaxaca, an area in which women control economic activities. Kahlo painted her mental and physical pain, but also the discomforts that only women experience, such as menstrual pain, miscarriages, infertility: subjects that were not discussed in public at the beginning of the last century, let alone painted.

Frida Kahlo’s work only received the recognition it deserves after her death, and her status as a feminist, free-spirited icon committed to the working class – especially women’s rights – only came later. Kahlo was very self-assured and outspoken about her multiple identity in both her life and art. With her life and work she fits in well with contemporary feminism, in which special attention is paid to intersectionality: a view that advocates emancipation in more areas than just gender.

Love story
In 1929, Frida Kahlo married one of the most famous Mexican painters, the muralist Diego Rivera. Rivera’s grand personality, revolutionary politics and inspiring murals made him a celebrity during his lifetime. Both Kahlo and Rivera had extramarital affairs. The relationship between Kahlo and Rivera was intense and in addition to mutual admiration for each other’s artistic qualities, they shared many interests: communism, the socialist ideals of the Mexican Revolution (1910-1917) and the birth of a national Mexican identity with a passion for Mexican cultures and history before the Spanish colonisation of the immense country in 1521. Together they formed an intriguing artist couple with a fascinating oeuvre, made during a revolutionary period in Mexican history.

Audio tour & publication
A free audio tour of the exhibition is available with contributions from various creators and thinkers, including fashion journalist Aynouk Tan, writer Maartje Wortel and feminist Anja Meulenbelt. In the museum shop there will be a renewed edition of the popular catalogue Frida Kahlo and Diego Rivera: from the Jacques and Natasha Gelman Collection.

Hybrid programme
The museum organises a programme that can be enjoyed both online and offline by young and old, with various partners in and outside Amstelveen. Of course in compliance with the then applicable corona restrictions. In addition to a webinar on the commercialisation of Frida Kahlo, the museum will be presenting an (online) curatorial tour, and we will join 24Hrs Amstelveen in the closing weekend of the exhibition. Check our website for the latest news.

Thank you
Finally, we warmly thank president Robert Littman and curator Magda Carranza de Akle of the Vergel Foundation for their indispensable support throughout this project. 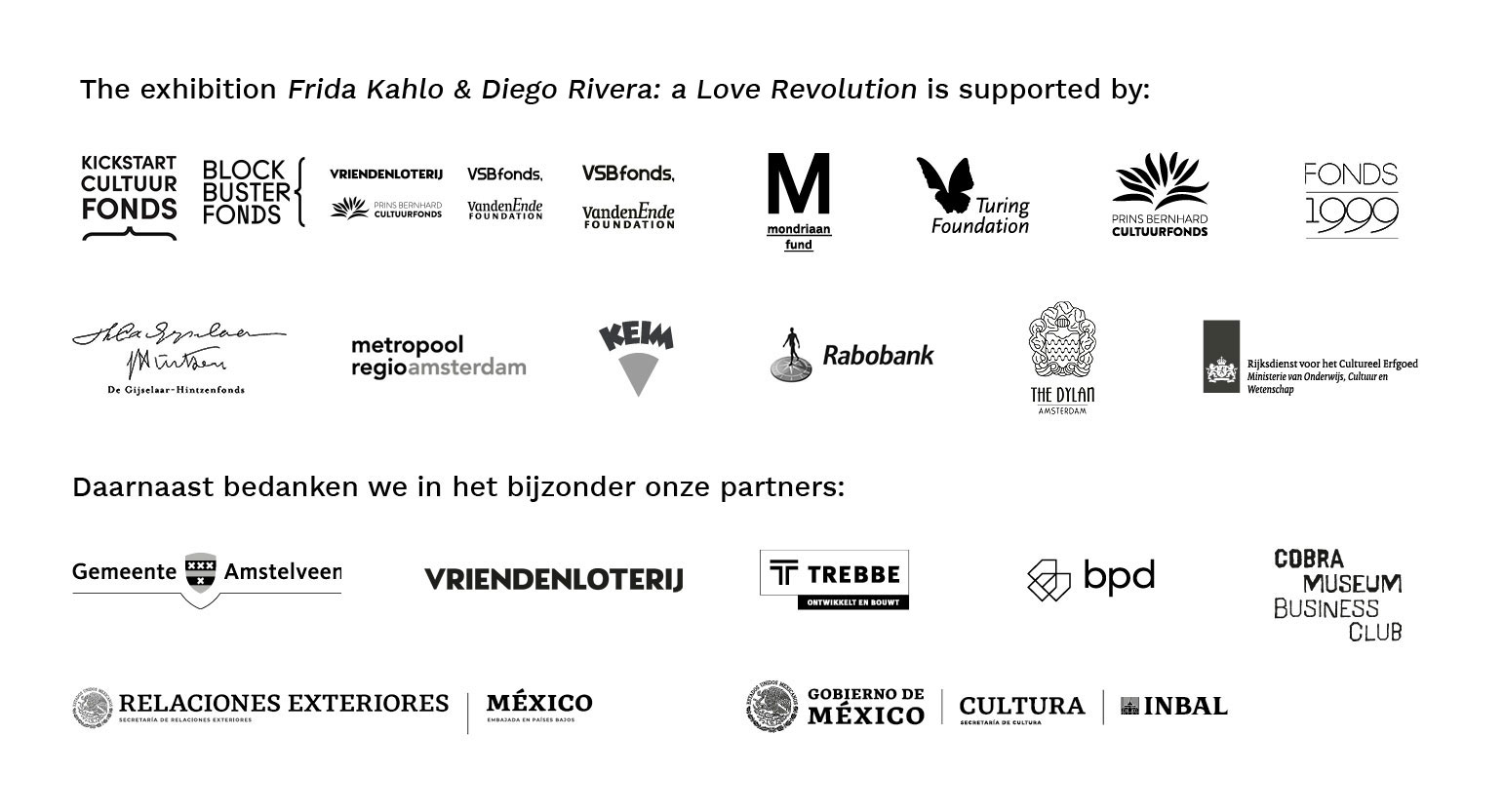