The exhibition gives an overview of the most important developments in Danish art in the years before, during and immediately after World War II, up to the founding of Cobra. Almost all of the 100 artworks in the exhibition are from Danish museums, who are lending masterpieces from their collections to the Cobra Museum.

In the first part of the exhibition We Kiss the Earth, visitors are taken through the origins of Danish abstract-surrealist art in the 1930s. Here, the artists’ collective Linien (“the line”) founded in 1934 and the magazine of the same name played a leading role.

The second part of the exhibition focuses on one of Denmark’s most radical artist collectives: Helhesten (1941 – 1944), also with a magazine of the same name (‘the Hell Horse’). Helhesten was initiated by Asger Jorn. Among the many other artists involved were Ejler Bille, Henry Heerup, Carl-Henning Pedersen and Else Alfelt. During the German occupation of Denmark, Danish artists were initially barely subject to censorship or other limitations. Unlike the Netherlands and Belgium, they could create and exhibit art until 1943 without worrying about the consequences. The occupation, the isolation from foreign countries and the close collaboration between the artists in the art magazine Helhesten formed a pressure cooker in which Danish art transformed pre-war surrealism into spontaneous abstraction and highly socially engaged art.

Helhesten‘s art was one of the great pioneers of later Cobra art: many of the Helhesten artists were involved in Cobra from the beginning. The developments in Danish art between the end of the war and the start of Cobra are the main focus of the final part of the exhibition.

Precursor to Cobra
In the years 1934-1948, a spontaneous, abstract art form developed that was unique to Denmark and would later be an important pioneer for the Cobra movement (1948-1951). The artists who started Cobra came from the Netherlands, Belgium and Denmark. The Dutch and Belgian artists were relatively young, unlike the Danish artists who were on average 10-15 years older. They had already experienced artistic development before and during World War II, and exhibited a lot of art. In doing so, they had a great influence on the younger generation of Cobra artists. Never before has an exhibition outside of Denmark been dedicated to this subject. Moreover, We Kiss the Earth breaks through the traditional canon of art history and also showcases women artists and artists who have often been ignored in conventional Danish and international art history, such as Else Alfelt, Franciska Clausen, Rita Kernn-Larsen and Elsa Thoresen. 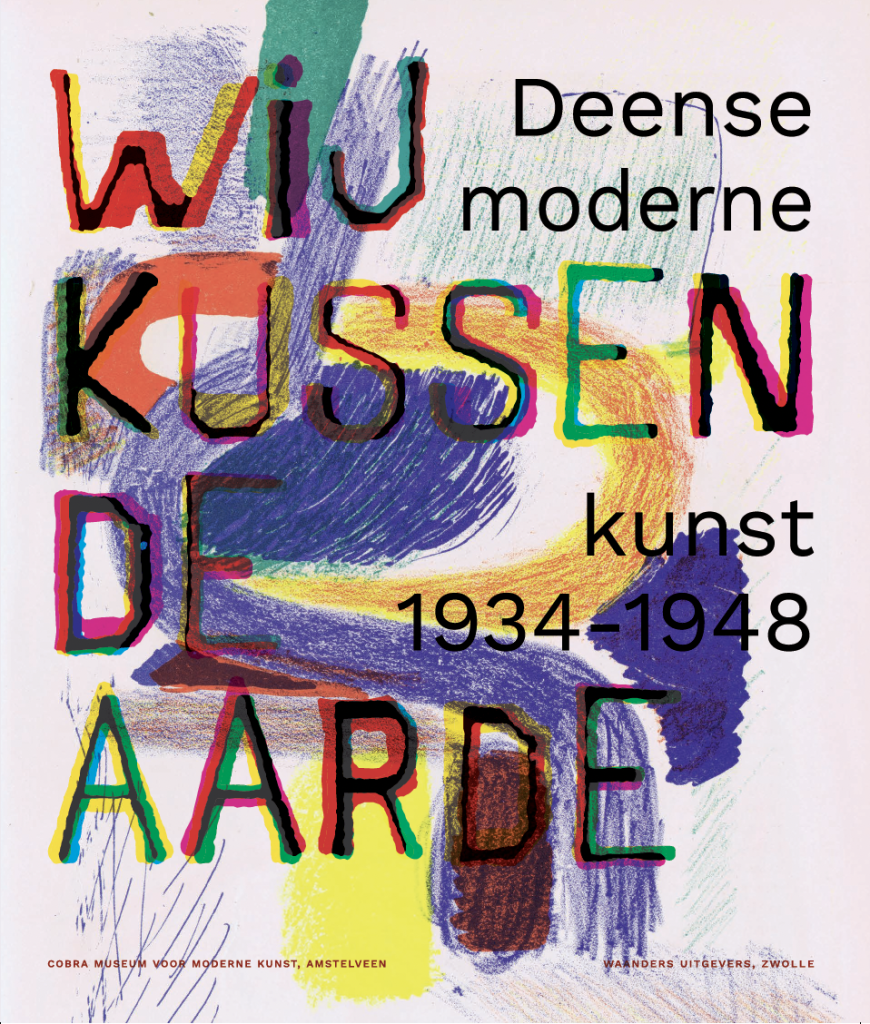 Catalogue We Kiss the Earth at the museum shop
The exhibition We Kiss the Earth. Danish Modern Art 1934-1948 is part of the anniversary year Cobra 75 and, together with the exhibitions Je est un autre. Ernest Mancoba & Sonja Ferlov and Becoming Ovartaci  forms a triptych on Danish modern art. The three exhibitions are accompanied by a richly illustrated catalogue compiled by the guest curators and published bilingually (Dutch and English) by Waanders Uitgevers. The book We Kiss the Earth is available at the Cobra Museum shop, among others.

Title – quote by Heerup
The title of the exhibition refers to a 1944 quote by Danish sculptor and painter Henry Heerup, in which he advocates abolishing pedestals to display sculptures on. These would get in the way of art and viewers and literally raise the threshold for enjoying art. Heerup wanted to bring art closer to the people and exhibited his works directly on the grass and earth: he kissed the Earth (he writes: “Vi Kysser Jorden” – “We Kiss the Earth”).

Guest-curator Pim Arts
The exhibition We Kiss the Earth. Danish Modern Art 1934-1948 is curated by guest curator Pim Arts, in collaboration with Hilde de Bruijn, who was also responsible for the concept of this Danish triptych. Pim Arts studied Art History and obtained his Master’s Degree from the University of Groningen. He holds a second master’s degree in Curatorial Studies from the University of Amsterdam. Arts has since held curatorial positions at the Cobra Museum, the Rijksmuseum, the Karel Appel Foundation and Museum Catharijneconvent.

Celebrating Cobra 75
2023 marks 75 years since the revolutionary Cobra movement was founded in Paris. The Cobra Museum of Modern Art in Amstelveen is celebrating this anniversary year with a major exhibition programme. Cobra (1948-1951) was an international movement of young, progressive artists creating colourful, expressive-spontaneous art. In the years after World War II, they caused a revolution: a breakthrough in modern art that continues to this day in artistic conceptions and artistic expressions. The name Cobra is a composite of: Copenhagen, Brussels and Amsterdam. The capitals where the founders of this artist group originated. These include Jorn from Denmark, Dotremont and Noiret from Belgium, Appel, Corneille and Constant from the Netherlands. Besides these big names, the Cobra Museum makes a strong case for an inclusive approach to the Cobra movement and regularly adds to the traditional Cobra canon. In 2019, for example, there was a major exhibition “New Nuances” specially dedicated to women artists in and around Cobra.

With thanks to
The anniversary programme Cobra 75 has been made possible by our partners and generous supporters. We especially thank the municipality of Amstelveen, VriendenLoterij, Trebbe, BPD, Rabobank Amstel & Vecht, Hizkia, Prins Bernhard Cultuurfonds, Carlsberg foundation, Embassy of Denmark, KEIM and the Cobra Business Club.