On 8 November 2018 it is exactly 70 years ago that the Cobra movement was founded in Paris. Its members were artists and poets from various European countries. The joy of complete spiritual and artistic freedom and spontaneity was their counterbalance to the nightmare of the war. Cobra caused quite an uproar in the Netherlands. The Dutch press spoke of ‘scribble, claptrap and splotches’.

This exhibition is on display until octobre 13, 2019. After that this show will travel to the Museo Arte Moderno in Mexico-city.

“We had non-stop discussions and disagreed on almost all points. But the cooperation was fruitful as long as we were able to keep it up. The point was that we wanted to understand each other in order to agree. This attitude created an inspiring cooperation of an incredibly broad scope.” Asger Jorn, in 1967. 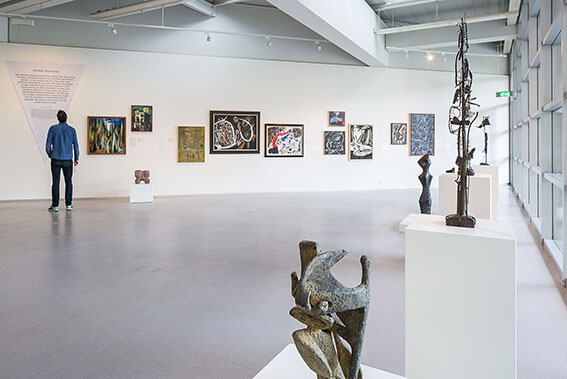 Cobra: A Multi-headed snake
Now, the then so revolutionary Cobra is anchored in European art history. In it, Cobra is mainly associated with colourful, expressive-spontaneous painting that was of influence long after the movement had fallen apart. The founders had very different ideas about the meaning of Cobra. For some that meaning could indeed be found in Cobra’s contribution to artistic developments, for others in Cobra’s spirit of absolute freedom and for yet others in the collaborations between the members and the cross-pollination between poets and painters. One thing is certain: there was never any unanimity about the meaning of Cobra. Perhaps it were precisely the contradictions and disagreements between its members that determined Cobra’s character, since these gave Cobra its vitality. 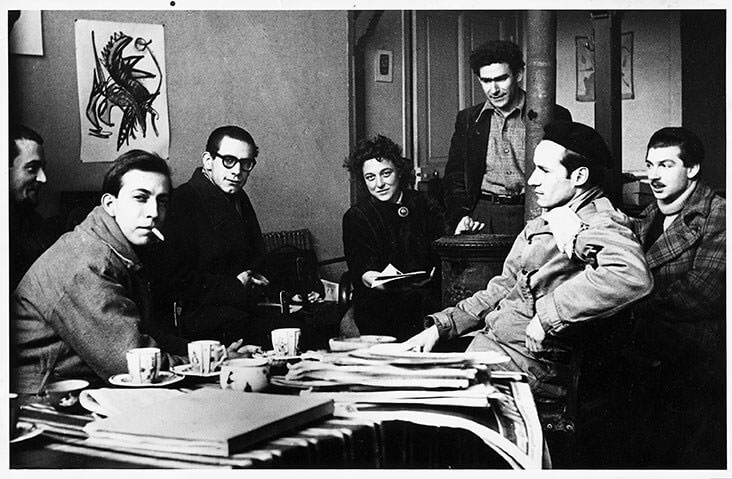 This exhibition therefore focuses on the diverse, sometimes diametrically opposed perspectives on Cobra. The oppositional dynamics stand out in quotes on festive flags around the glass wall of the inner courtyard. In the selection of works and archive materials, the emphasis is on the period that the movement officially existed, 1948-1951, but works from earlier and later dates are also included in the exhibition. 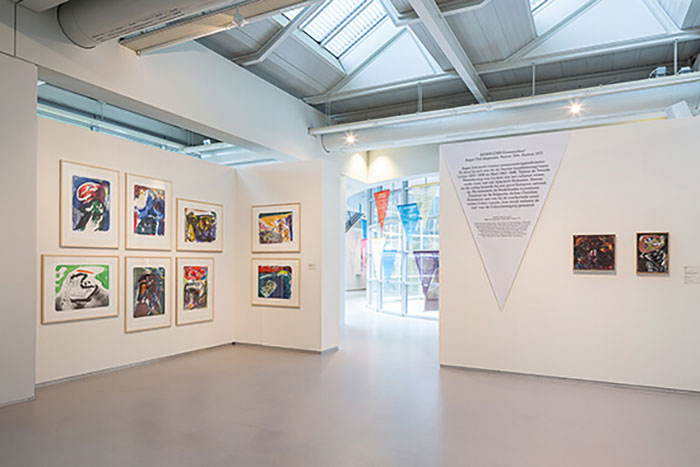 From the 1960s onwards, ten years after the disbandment of the Cobra movement, art-historical articles about Cobra were published in the Netherlands and abroad. In 1974 the Dutch art historian Willemijn Stokvis published the standard work on Cobra. She stated that the key importance of Cobra was to be found in the development of a particular painting style, a ‘Cobra language’. This development had started with the Danish experimentalists, even before Cobra.

Cobra founder and poet Christian Dotremont objected to the idea of a ‘Cobra language’ and also to the idea that Cobra had developed in a perfectly straight line from Danish painting. He was of the opinion that Cobra was independent. According to him, Cobra distinguished itself through an entirely different aspect: the ‘inter-specialist’ and ‘anti-specialist’ works of art, such as the collaborations between poets and artists. He moreover saw Cobra as something that still lived on. This in turn provoked criticism from Constant and Jorn, who saw the Cobra movement as an experimental exploration that had now been completed.

In the early 1980s Constant stated that if there was such a thing as a Cobra style, it was to be found in the joint works, as Dotremont had been stressing. They both still disagreed with Stokvis at that time. In 1988, Graham Birtwistel emphasised the enormous importance of the oppositional dynamics within the Cobra group in an art-historical journal, just as the Danish art historian Troels Andersen had already done in 1961. What made Cobra so important and unique was the vitality that resulted from these dynamics. From an art historical point of view, too little importance would have been attributed to the contradictions within the group and to the theoretical side, and too much to the material side of paint and canvas.

Now, 70 years after the start of the movement, we can conclude that Cobra was a many-headed snake with multiple voices. This has resulted in divergent, sometimes diametrically opposed perspectives on Cobra, also in historiography. Some voices have been heard more than others. The most important ones are given the stage in this exhibition.